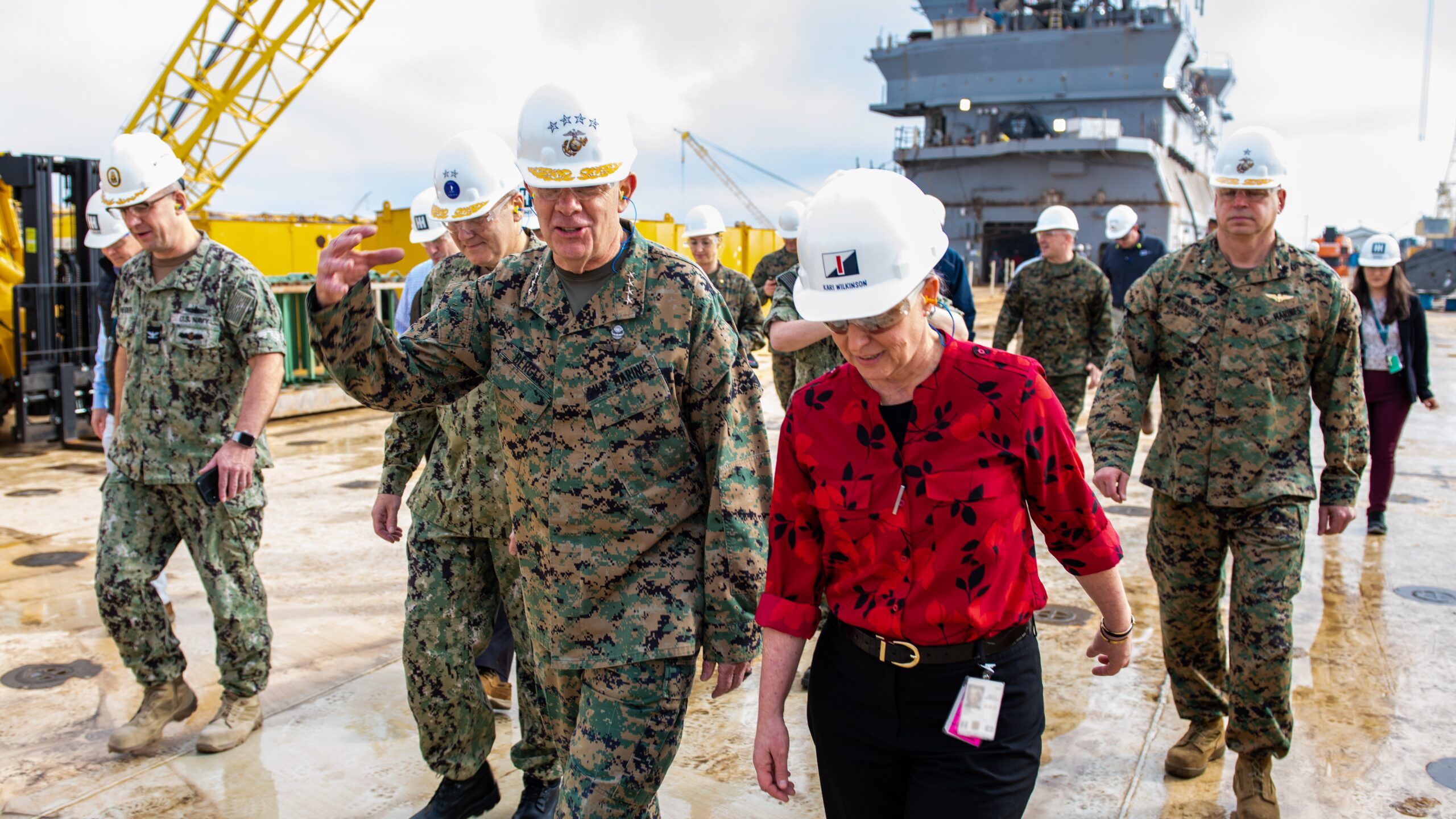 “We value the opportunity to showcase our talented shipbuilders and state-of-the-art facility to the Marine Corps and Navy,” Ingalls Shipbuilding President Kari Wilkinson said. “It’s a great day when our customers see first-hand the work we are completing to support their service, and when we can hear directly from them on requirements.”

As the sole builder of the entire San Antonio class of ships, Ingalls has delivered 12 San Antonio-class ships to the Navy and has three more under construction, including Richard M. McCool (LPD 29), Harrisburg (LPD 30) the first Flight II LPD, and Pittsburgh (LPD 31). The shipyard is also building large-deck amphibious ships for the Navy and Marine Corps, delivering a total of 15 ships (Tarawa class, LHA 1-5; Wasp class, LHD 1-8; and most recently America class, LHA 6 and LHA 7). The large-deck amphibious ship production line remains online and efficient with the ongoing construction of Bougainville (LHA 8) and LHA 9.

“It’s always a good day when you get to see amphibious warships being built,” said Gen. Berger, commandant of the U.S. Marine Corps. “Amphibious ships are critical for the Marine Corps’ ability to modernize for a potential near-peer fight while we still perform our daily crisis response missions around the globe — we need amphibs for all our missions.”

Ingalls has designed, built and maintained amphibious ships, destroyers and cutters for the U.S. Navy, Marine Corps and the U.S. Coast Guard for nearly 85 years. Recently, nearly $1 billion was invested in the infrastructure, facility and toolsets at Ingalls enabling shipbuilders, improving product flow and process efficiency, and enhancing product quality. Ingalls is supported by over 700 suppliers across 49 states.  As the largest supplier of U.S. Navy surface combatants, Ingalls is simultaneously building four classes of ships and has pioneered the development and production of technologically advanced, highly capable ships for the surface Navy fleet for decades.

HII is a global, all-domain defense partner, building and delivering the world’s most powerful, survivable naval ships and technologies that safeguard our seas, sky, land, space and cyber.

As America’s largest shipbuilder and with a more than 135-year history of advancing U.S. national defense, we are united by our mission in service of the heroes who protect our freedom. HII’s diverse workforce includes skilled tradespeople; artificial intelligence, machine learning (AI/ML) experts; engineers; technologists; scientists; logistics experts; and business professionals. Headquartered in Virginia, HII’s workforce is 43,000 strong. For more information, visit: